as always, birthday celebrations go on and on each year for our boys.  we have recently adopted "family fun days" as a better substitute for a birthday party.  and believe it or not, the boys prefer it...maybe because they get to plan our entire day, including meals and activities.

we celebrated noodle's family fun day on a friday that we did not have school.  it began with a trip to dunkin donuts.  i didn't complain! 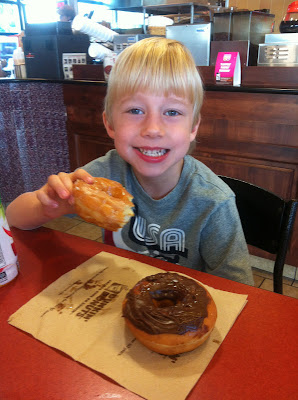 then we headed to walmart to buy a small present for him (he chose a new beywheelz), after trying out the skateboards!

then we ventured on to the fort worth science and history museum to meet up with a few of his friends from school that graciously invited us to take advantage of their membership there.  we spent the morning hours digging for dinosaur bones and exploring their exhibits, including a bed of nails and a hurricane wind tunnel. 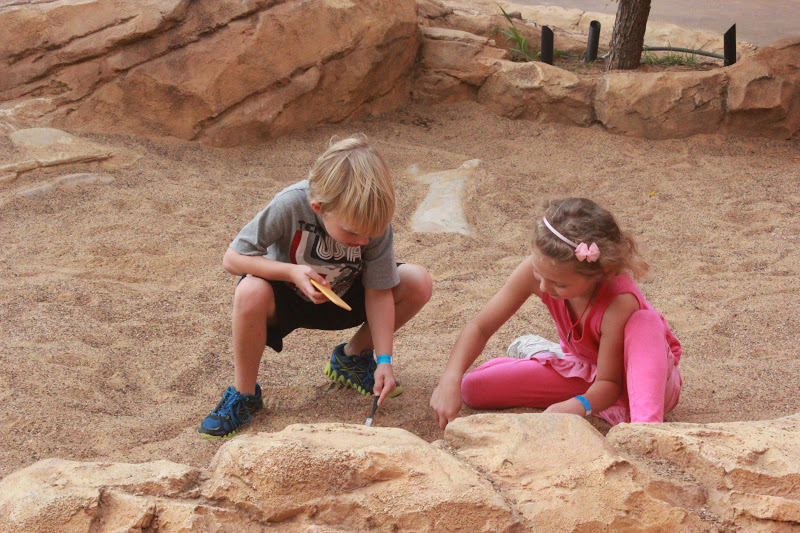 noodle chose mcdonald's for lunch.  i am not a fan, but hey, it's his day. 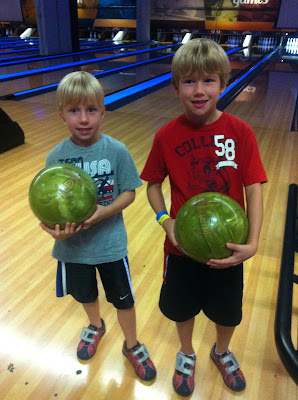 then we went to main event for some family fun bowling.  after 3 games, the lure of the arcade games was too much.  after trying to convince both boys not to waste their money on those claw games that are designed to never let you capture and grab a cheap stuffed animal, we relented and this is what happened! 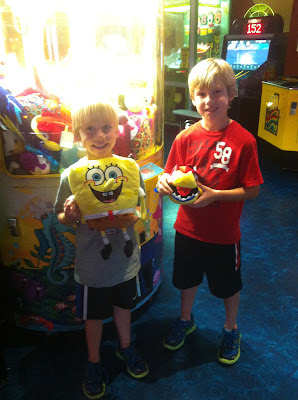 he won twice!!!  we ended the day with dinner at chili's and renting a movie and eating candy.

the next birthday celebration was at mimi and poppy's house.  he was so excited to get a harry potter lego book, a new beyblade, some new athletic clothes, and a new scooter with light up wheels!!!  we ate cookie cake and played outside. 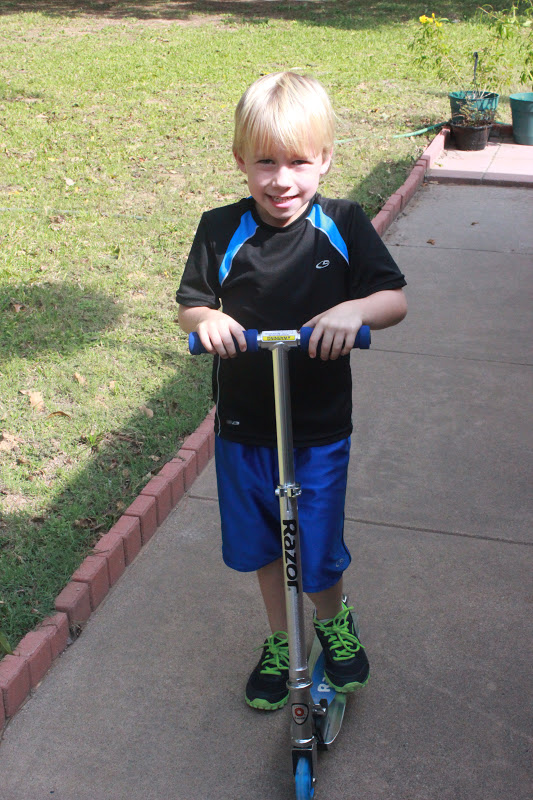 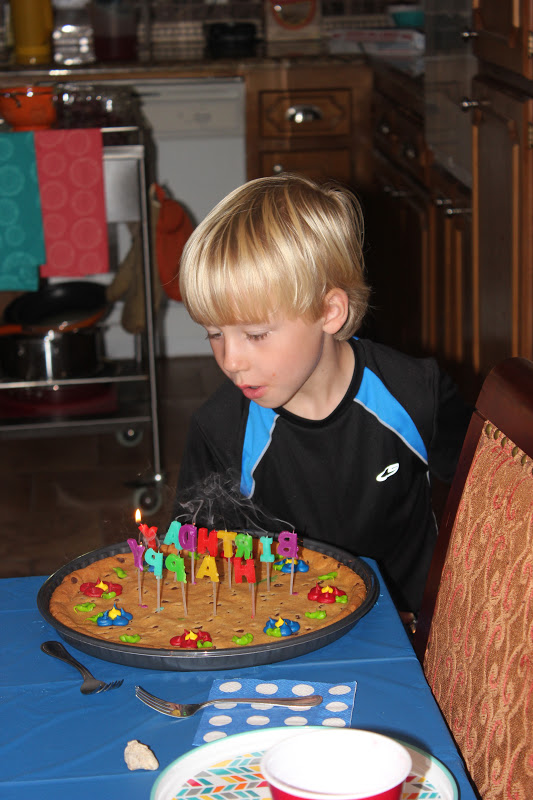 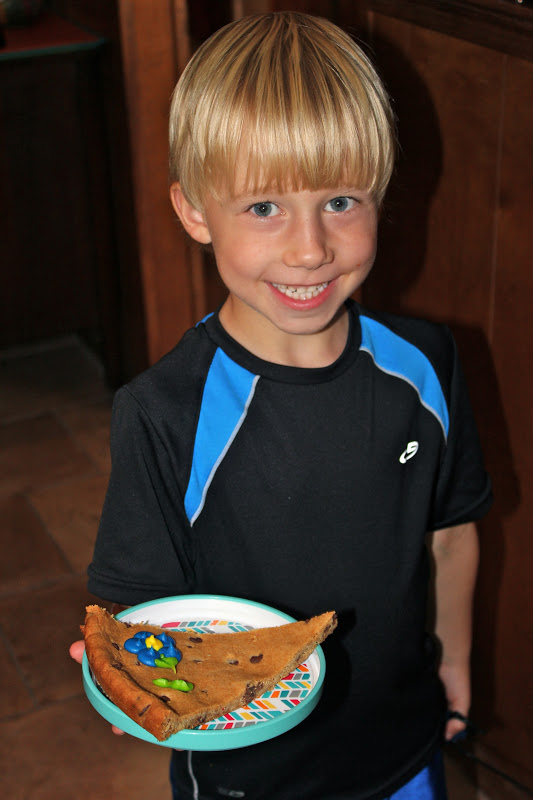 on noodle's actual birthday i took cookies and drinks up to school at recess for his school buddies. 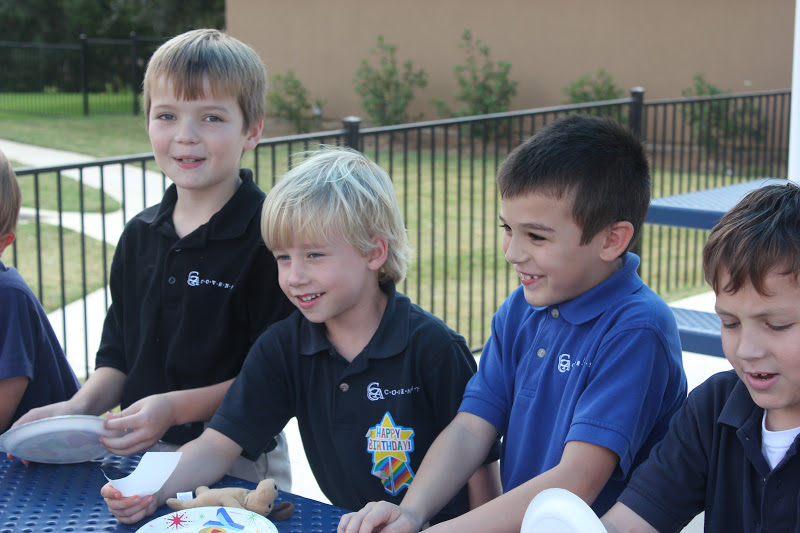 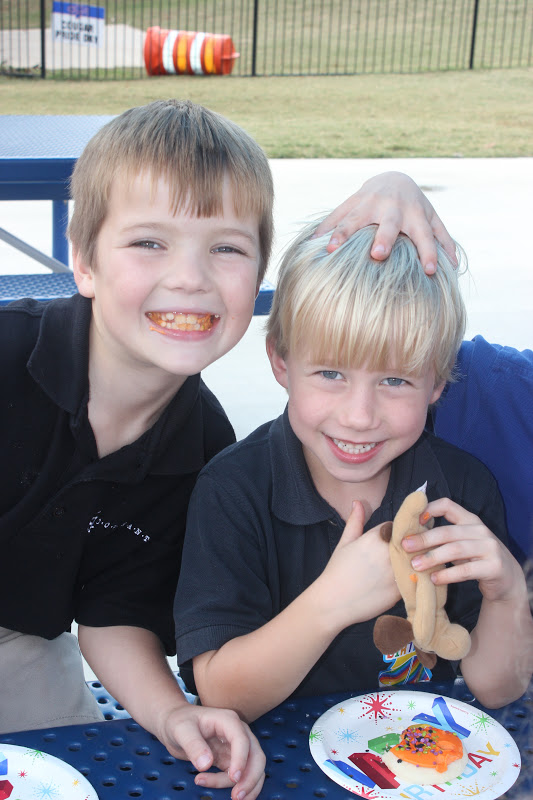 before dinner, he opened presents from us.  he got a new basketball goal (which broke in 2 minutes and i had to ship back so don't buy this one!!!), basketball shorts and a beywheelz stadium from his brother burrito. 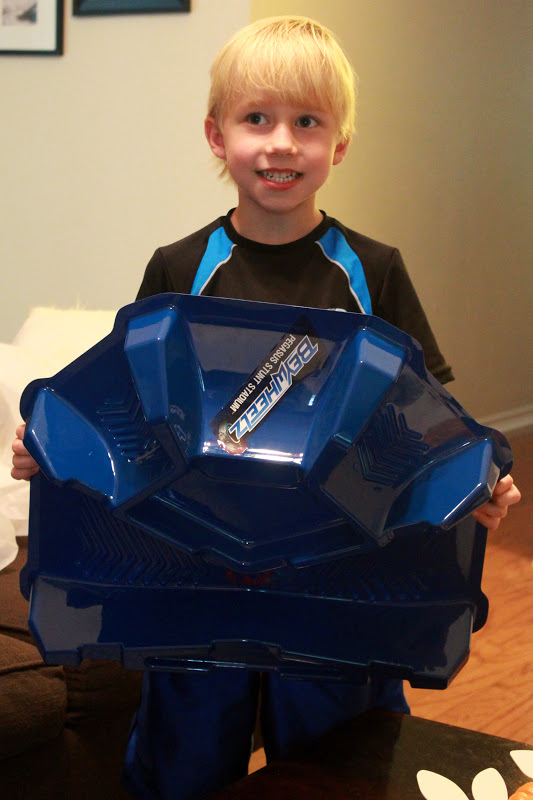 we also went out for dinner (again, his choice!) at ihop and then came back home to open presents on skype with nina, pappaw and nonna in st. louis.  he was so excited to get more beywheelz, a beyblade destroyer dome, money and a scooby doo game (thanks uncle daniel!). 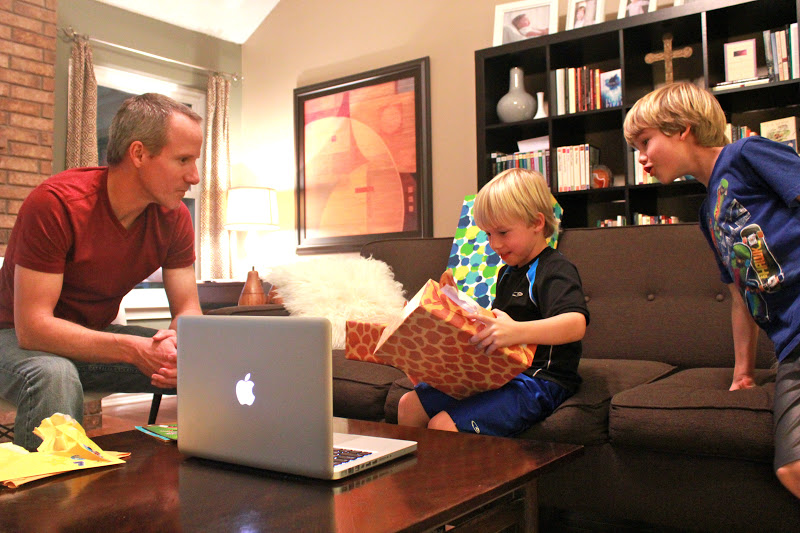 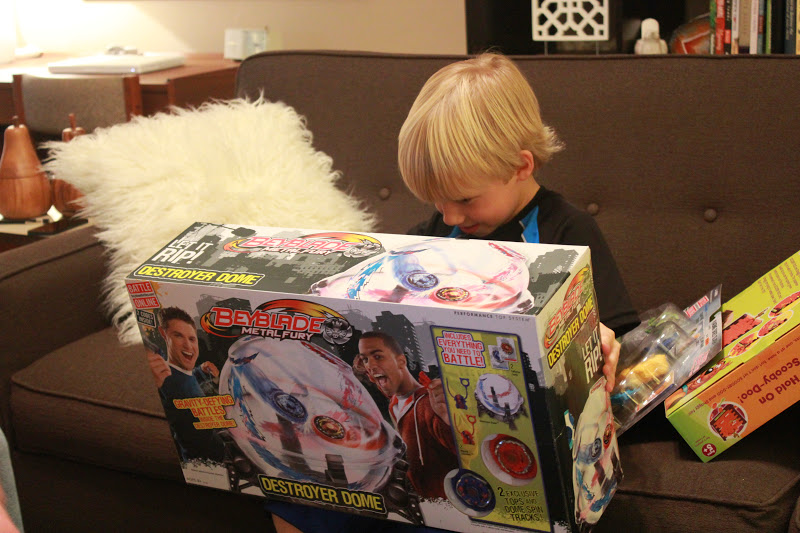 i would say that this boy is blessed beyond measure and we sure had a good time celebrating him!  happy 7th birthday noodle!!!
Posted by Jennifer at 3:43 PM No comments:

Happy 7th Birthday to my Noodle 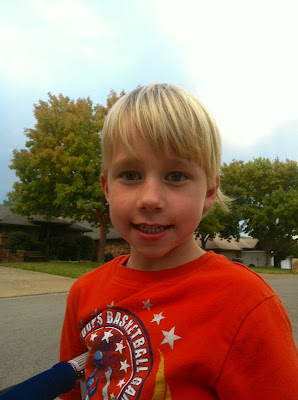 another of my babies grows a year older.  i don't like it.  at all.  but i haven't figured out a way to make it stop.

my sweet noodle is 7 today!

noodle, you are such a blessing to our family.  you are just the right person to level out the other 3 high-strung residents of your home.  you are sweet and sensitive.  you don't take things too seriously but you do your best.  you are still a game nazi.  you love playing games all day long.  you are quite the sports buff too.  it's been fun for us to watch our little leftie play baseball this season.  you are doing great in 1st grade.  your lowest grade was a 99 for the first quarter.  you are a great reader and i am constantly amazed at your tenacity to sound out words that you don't immediately know.  math comes natural.  i think it's from all those games you make us play.  you are a budding musician and we are so glad you are learning to play violin.  you are a good friend and easily float from one friend to another....everyone is your best buddy.  i love that you and your brother are close and share a room and sometimes sneak into your big bed together. 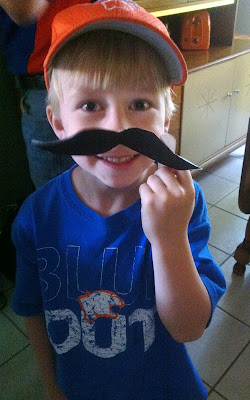 we are so grateful for the gift from God you are to us.  we look forward to seeing the Lord develop your gifts and skills for His glory.  we pray that you will be a passionate fireball for Him for your whole life.

we love you so much!
Posted by Jennifer at 11:13 AM No comments:

Thanks for reading our blog! We are thankful for our many blessings! I am a stay at home mom of 2 fun-loving boys, but now also work part-time outside of the home. What a juggling act! My husband John is a teacher at a classical, Christian school. We love books, being together, good coffee and mid century modern furniture. We love remembering and retelling what the Lord has done and sharing it with you!

Known for his great hair and athletic prowess, this is my full of life and activity 8 year old son, "T." He plays hard and sleeps well and doesn't miss a thing in between! He doesn't remember a day without his little brother which makes them the best of friends.

Known for his BIG blue eyes and long eyelashes (where did those come from?), this is my sweet 7 year old mama's boy "A." His laid back personality makes him different from his big brother, but he is never too far behind. His inquisitive nature and "blonde" personality always keeps us laughing!

Where Do You Live?